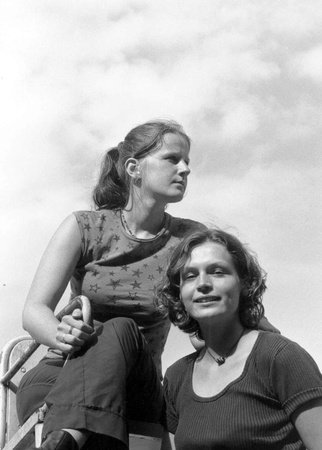 Linda de Haan lives in the North of Holland. As a little girl, she was constantly drawing and creating things. Linda has always thought reading was fun—especially when it was past her bedtime!
After high school she went to the Academy of fine arts in Groningen. In 1998 she graduated as a drawing teacher and illustrator.

After finishing her studies, Linda shared a studio with some talented colleagues.  There, she wrote and illustrated her first picture book,  King & King (2000), with co-author and illustrator, Stern Nijland. Their book is now published in eight languages! King & King was such a hit that it was taken to the theater stage where it has been preformed from Vienna to Mexico City. At the request of their American publisher Tricycle Press (an imprint of Random House Children’s Books), the illustrator duo made a sequel, King & King & Family (2004), about the kings adopting a child.

Linda de Haan has been a full-time illustrator for over ten years and currently works from her home studio. In addition to illustrating and creating children’s picture books, she creates artwork for a children’s program on a local television station, and illustrates for magazines and novels. She loves to dream up and create fantastic collages and linocuts to share with the world in books, magazines, and on TV.