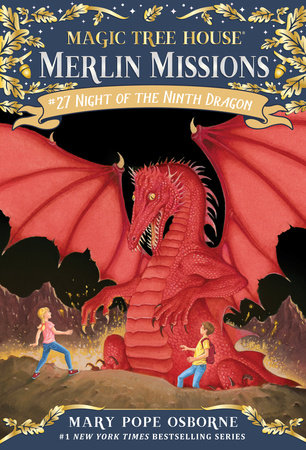 Night of the Ninth Dragon

Please come to Camelot.  The magic tree house whisks Jack and Annie through space and time to find that the castle of Camelot has been attacked and King Arthur has been gravely wounded. To save the kingdom—and the king—Jack and Annie have only one day to solve a riddle that will help them find a missing dragon!

Did you know that there’s a Magic Tree House book for every kid?


Copyright © 2018 by Mary Pope Osborne; illustrated by Sal Murdocca. All rights reserved. No part of this excerpt may be reproduced or reprinted without permission in writing from the publisher.

Please come to Camelot.  The magic tree house whisks Jack and Annie through space and time to find that the castle of Camelot has been attacked and King Arthur has been gravely wounded. To save the kingdom—and the king—Jack and Annie have only one day to solve a riddle that will help them find a missing dragon!

Did you know that there’s a Magic Tree House book for every kid?

Have more fun with Jack and Annie at MagicTreeHouse.com!

Mary Pope Osborne is the author of the New York Times number one bestselling Magic Tree House series as well as co-author of the Magic Tree House Fact Tracker series, along with her husband, Will, and her sister, Natalie Pope Boyce.   For more information, visit the Magic Tree House® website at MagicTreeHouse.com!
Photo © Paul Coughlin
Learn more about Mary Pope Osborne
Sal Murdocca has illustrated more than 200 children's trade and textbooks. He is also a librettist for children's opera, a video artist, an avid runner, hiker, bicyclist, and a teacher of children's illustration at the Parsons School of Design. Sal lives and works in New York with his wife, Nancy. Learn more about Sal Murdocca

The day was cloudy and windy. Jack was sitting on the front porch, using a yellow marker to highlight a book called Caring for Your New Puppy.
“Fetch, Oki!” Annie shouted, throwing a ball across their yard.
Yip, yip! A scruffy black-and-white puppy raced after the ball and caught it in his mouth. “Bring it back!” Annie called. But Oki dashed away from her instead.
“He never does what you say,” Jack said with a laugh.
“Yes, he does,” said Annie. “He fetched! He just decided not to bring it back.” She ran after Oki and wrestled the ball away from him. “Ready to go to the dog park now?” she called to Jack.
“Yep.” Jack highlighted a paragraph about puppy dental care. Then he closed the book and dropped it into his pack along with his yellow marker. “All set.”
“Did you pack supplies?” said Annie.
“Just his leash and water bowl,” said Jack. “And some puppy treats.” He pulled the leash out of his pack.
“Wait. Let’s see if he’ll walk with us on his own,” said Annie.
“If I know him, he’ll take off,” said Jack.
“Come on, give him a chance. I’ve been working with him,” said Annie. “Watch. Oki! Come!” The little dog ran to Jack and Annie.
“See?” said Annie as they started down the sidewalk.
“Do you really think he’ll stay with us?” said Jack, putting the leash back in his pack.
“Sure,” said Annie.
“Hey, do you have any money?” Jack asked.
“What for?” said Annie.
“I thought we could stop at the pet store,” said Jack. “We need to get him a dog toothbrush and toothpaste. I was just reading that canine tooth care is very important. You have to—” Before Jack could finish, Oki yipped and dashed away down the sidewalk.
“Oki, wait! Oki!” shouted Annie. “Stay!”
But the puppy kept running. He crossed the street, bounded over the curb, and disappeared into the Frog Creek woods.
“I knew it!” Jack said.
“Oki!” Annie shouted. She and Jack raced into the woods after the puppy. Tree branches were waving in the wind. Dry autumn leaves shook and rustled.
“Oki!” yelled Jack.
“You were right!” wailed Annie. “We should have put him on the leash!”
“Don’t worry, we’ll find him,” said Jack.
“Oki!” they called. “Oki!”
Yip, yip!
“Did you hear that?” said Jack.
“Yes!” Annie and Jack took off running between the trees. They followed the yipping sounds— until they found the puppy at the base of a giant oak tree.
The magic tree house was nestled high in the treetop. The rope ladder was swaying from side to side.
“Good boy, Oki!” Annie said. She picked up the puppy and giggled as he licked her face. “How did you know it was back?”
“Teddy?” Jack called, looking up at the tree house. “Teddy?”
There was no answer, and no one looked down from the window.
“Let’s climb up,” said Annie. “There must be a message inside.”
Yip? Yip?
“Yes, you’re coming with us!” Annie said to Oki. “Here, get in Jack’s bag.” Jack took off his backpack, and Annie lowered the puppy inside. “Is that going to be too heavy?”
“No, he doesn’t weigh much,” said Jack, pulling on the pack. “Let’s go, buddy.” Jack carried Oki up the rope ladder, and Annie followed.
When they had all climbed into the tree house, Jack took off his pack and set it on the floor. Oki scampered out and began sniffing every corner.
“I don’t see anything here,” said Annie, looking around.
“Me neither,” said Jack. There was no message from Merlin, no book from Morgan. “There’s nothing here to tell us what to do.”
Yip, yip, yip! Oki was looking out the window, barking at the woods.
Jack looked up and saw a scrap of paper floating on the wind. “Hey, is that our note?” he said.
“It must have blown out of the window!” said Annie. “I’ll get it.” She hurried back down the rope ladder. Oki kept barking as Annie chased after the paper and finally snatched it from the ground.
Annie read the note to herself and smiled.
“What does it say?” Jack called.
“Good news!” said Annie.
“What? What is it?” said Jack.
“See for yourself!” said Annie. She scrambled back up the ladder and handed Jack the scrap of paper. “Our favorite place to visit.”
Jack looked at the old-fashioned handwriting:
Dear Jack and Annie,
Please come to Camelot.
“That’s it?” said Jack.
“It’s good news, right?” said Annie.
“Yeah, but it doesn’t look like Merlin or Morgan’s handwriting, or Teddy’s. . . . I don’t understand. Who wrote this? And why?” said Jack.
“It doesn’t matter,” said Annie. “It’s an invitation to Camelot! I love visiting Camelot, don’t you?”
“Of course,” said Jack. They had visited the kingdom many times. He loved its orchards and the Great Hall and Morgan’s magnificent library. Most of all, he loved their friends in Camelot. “But something’s weird.”
“Don’t worry, Jack. Let’s just go,” said Annie. “Get ready, Oki!” She pointed at the word Camelot on the note. “I wish we could go there!”
Yip! Yip!
Jack grabbed Oki and held him tightly.
The wind blew harder.
The tree house started to spin.
It spun faster and faster.
Then everything was still.
Absolutely still.


Copyright © 2018 by Mary Pope Osborne; illustrated by Sal Murdocca. All rights reserved. No part of this excerpt may be reproduced or reprinted without permission in writing from the publisher. 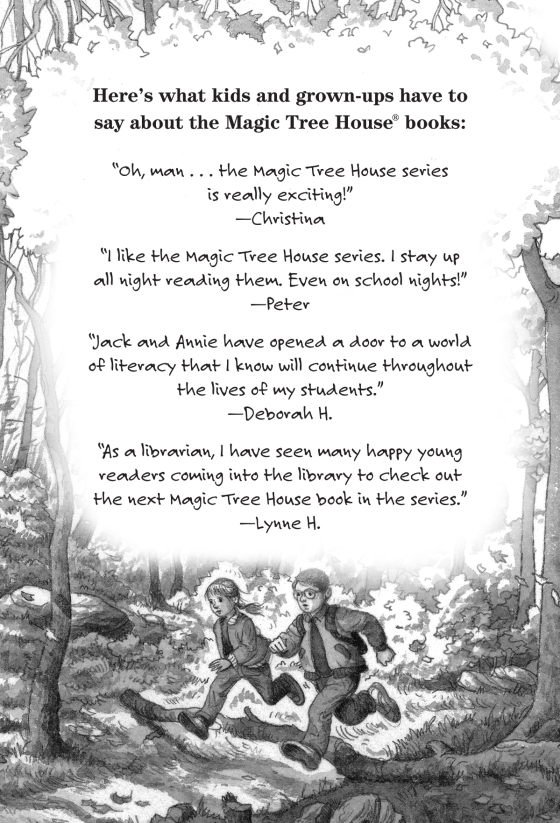 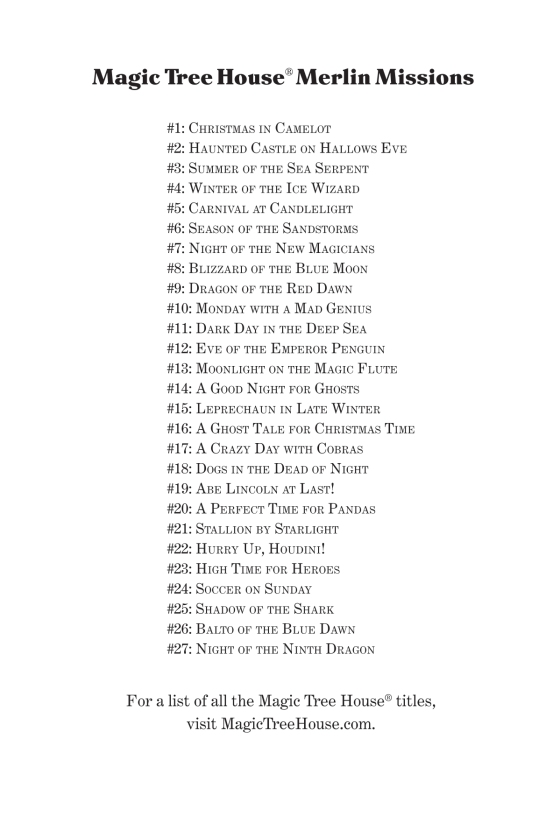 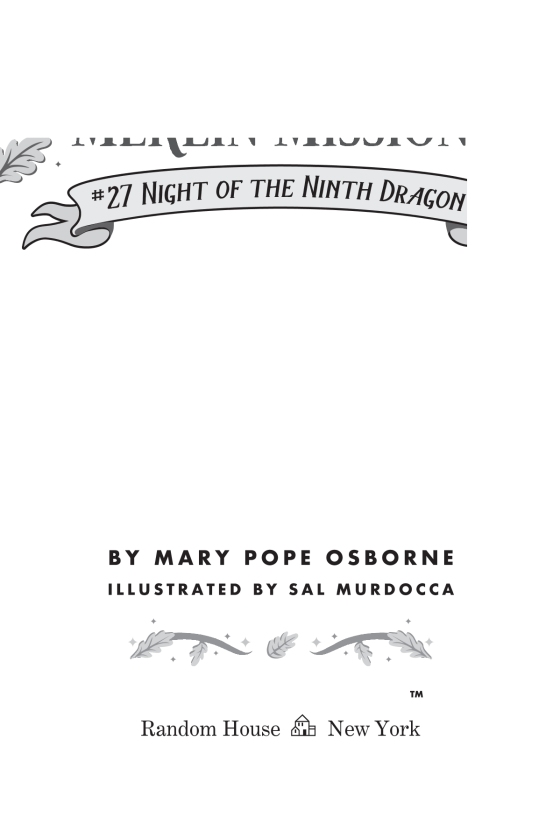 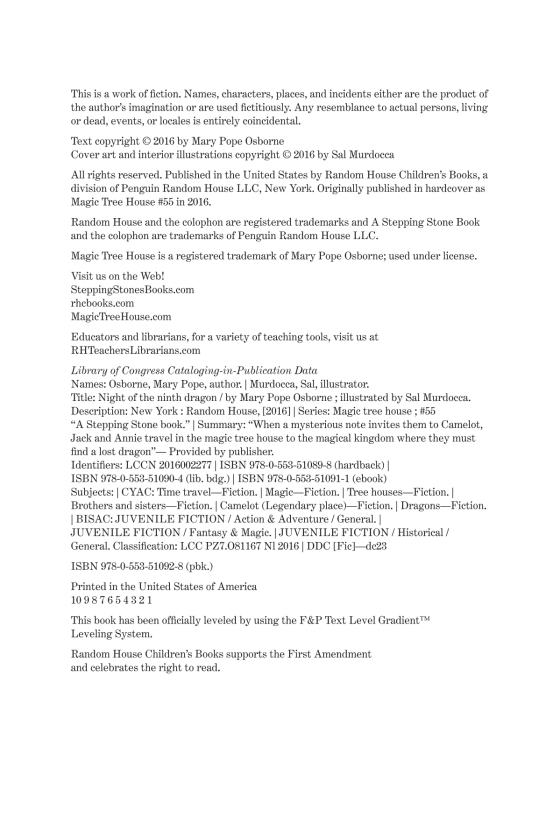 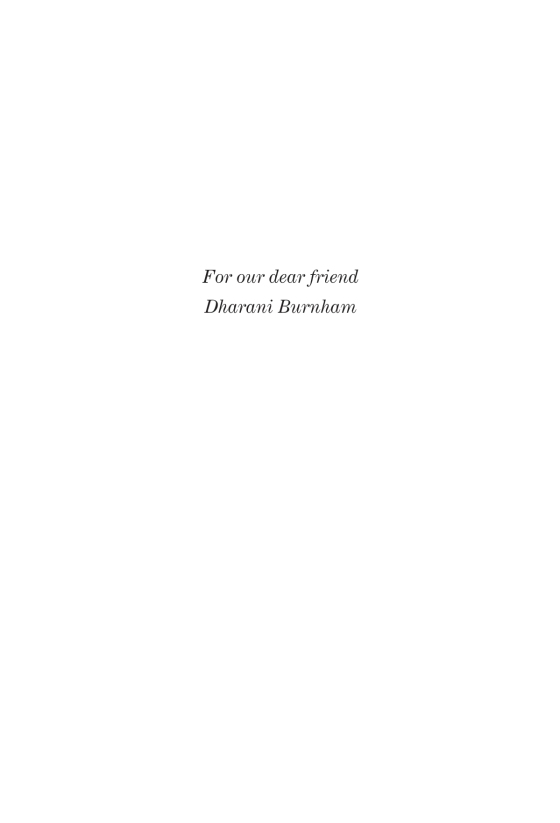 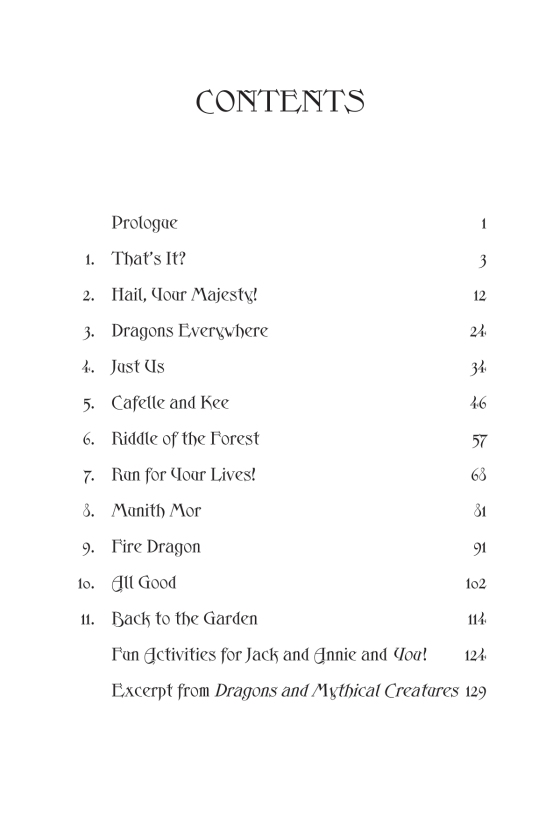 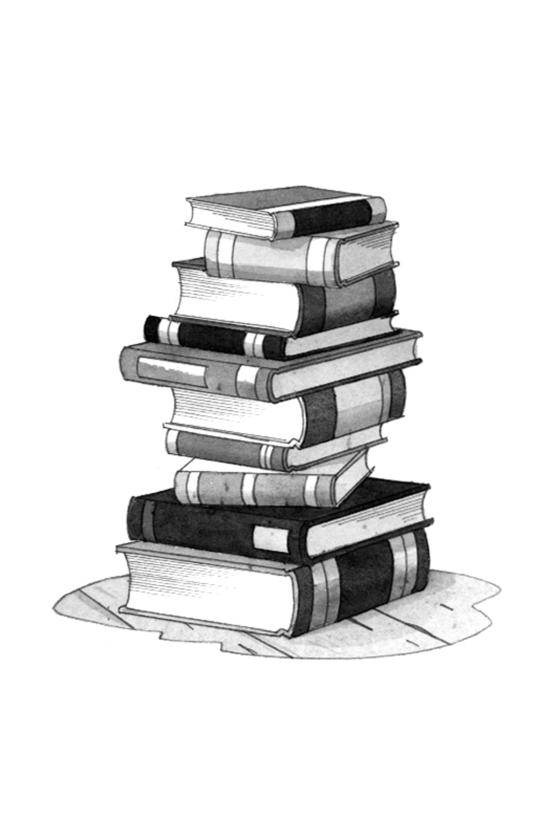 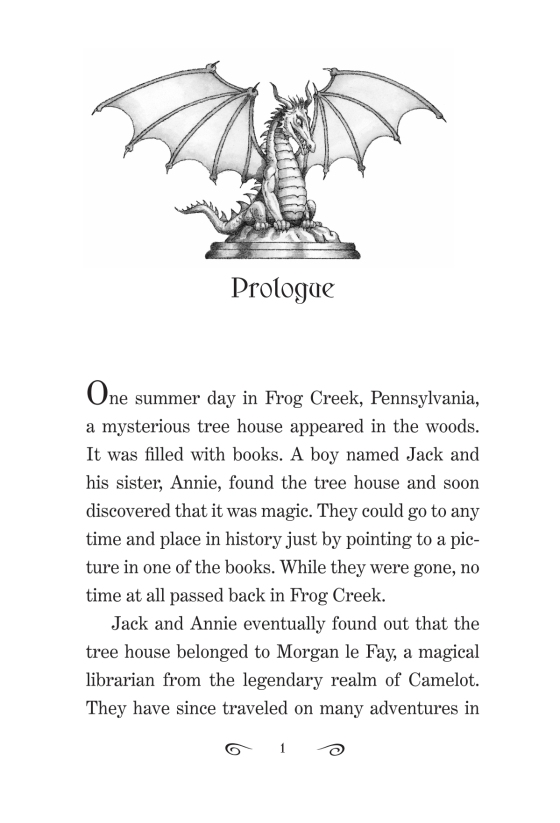 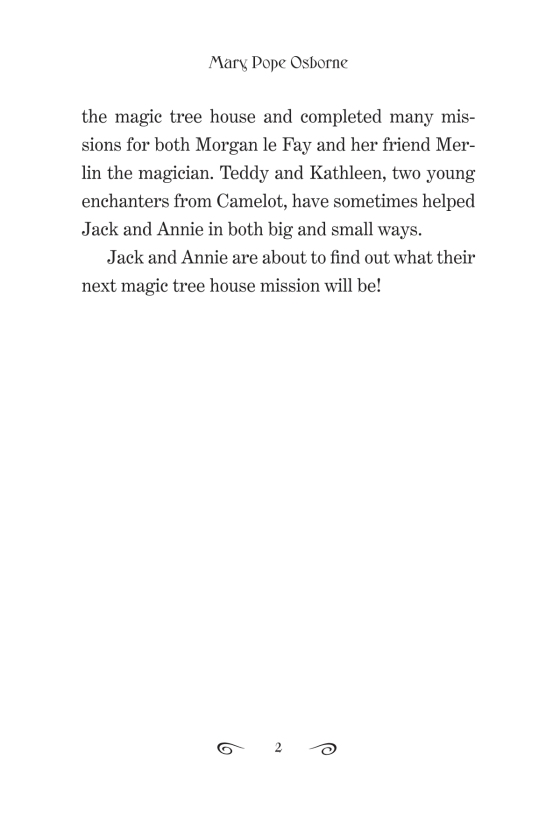 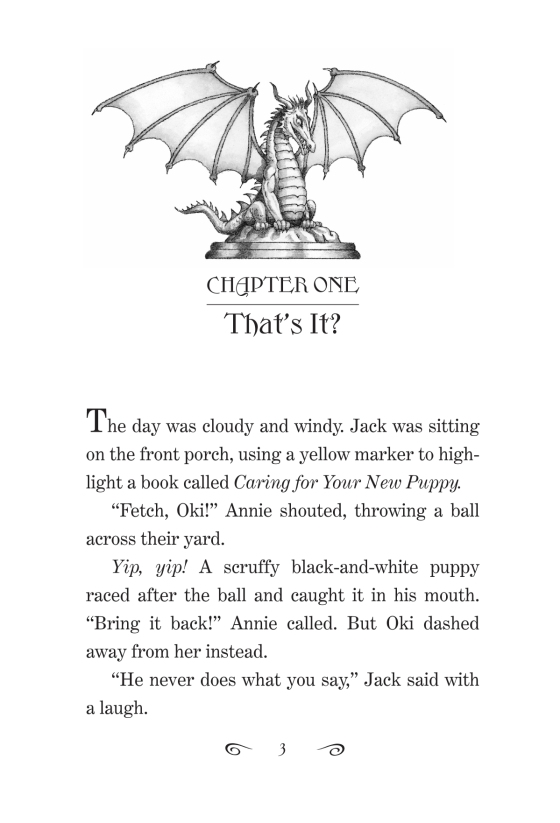 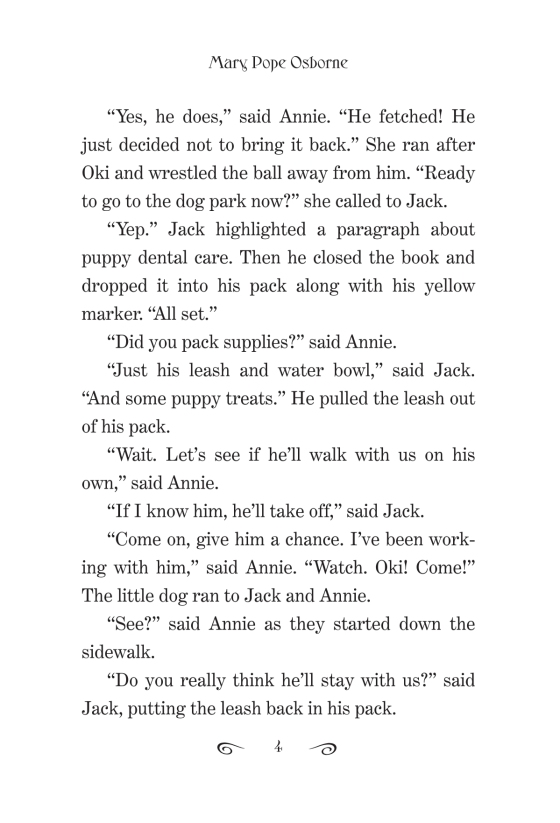 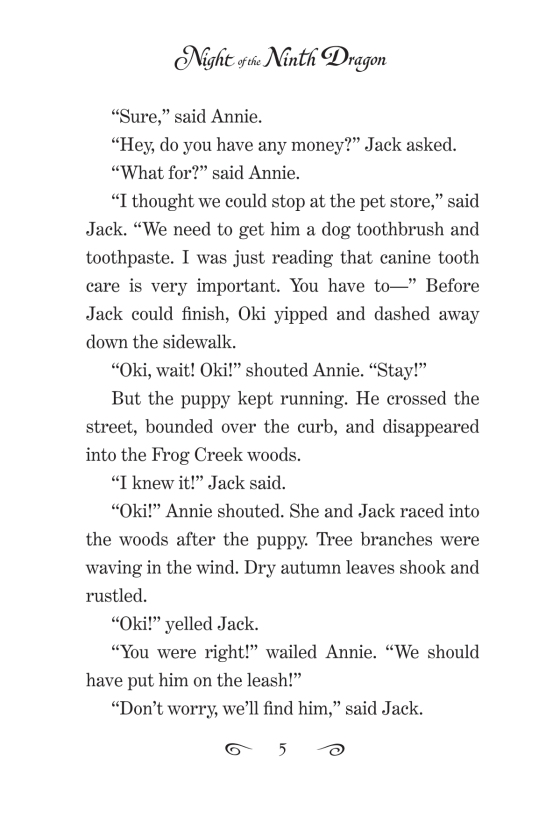 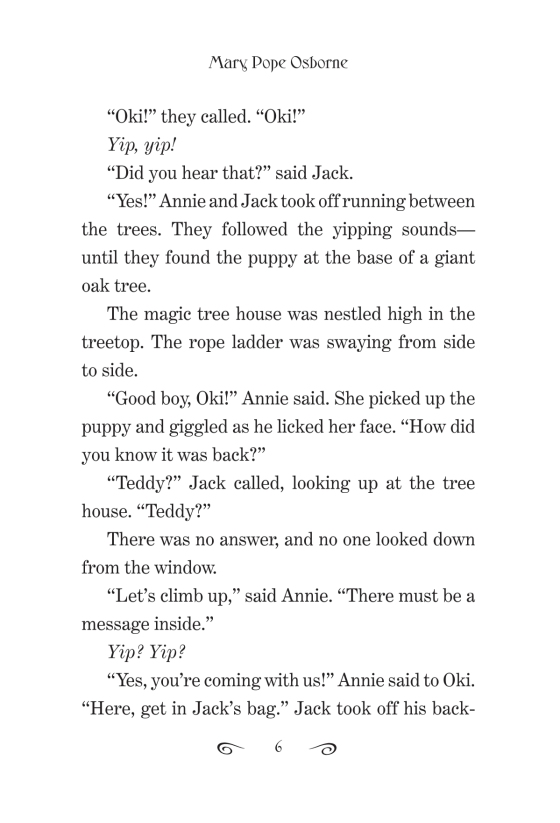 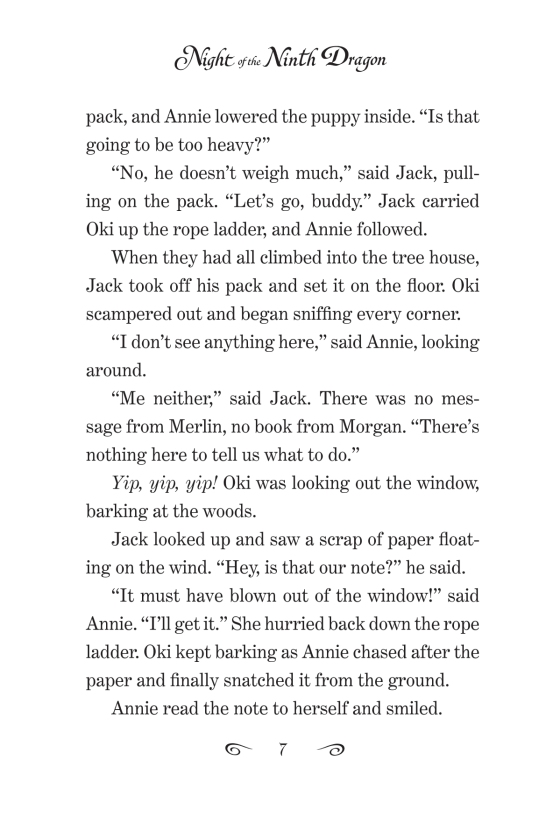 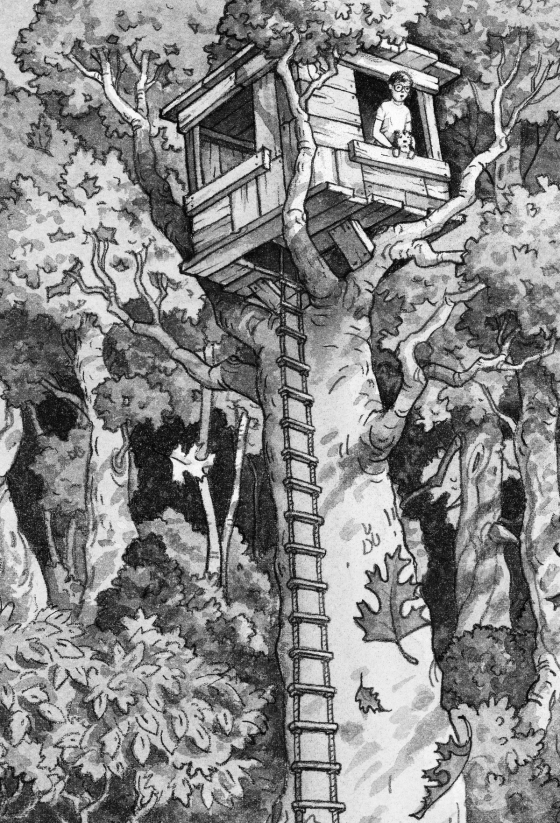 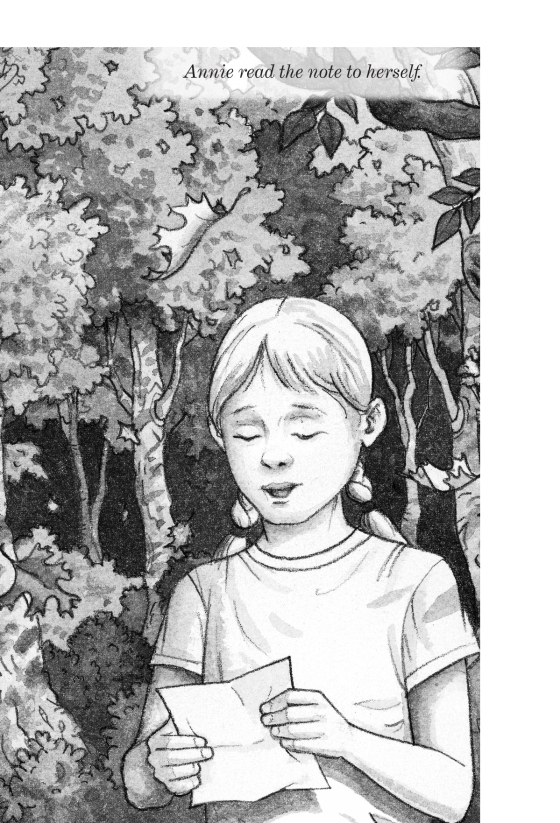 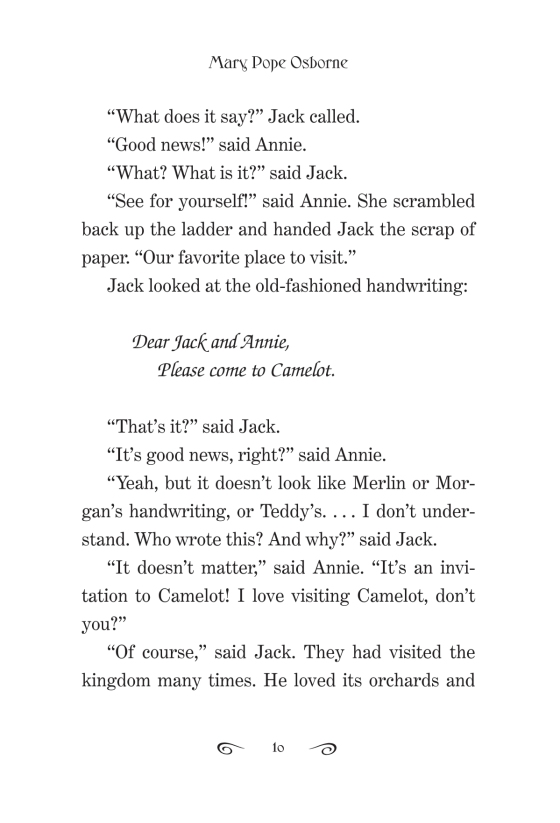 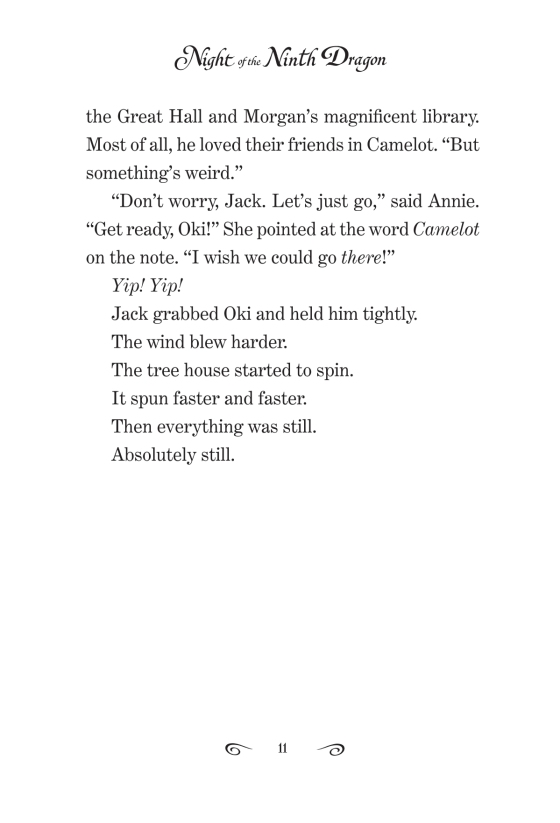 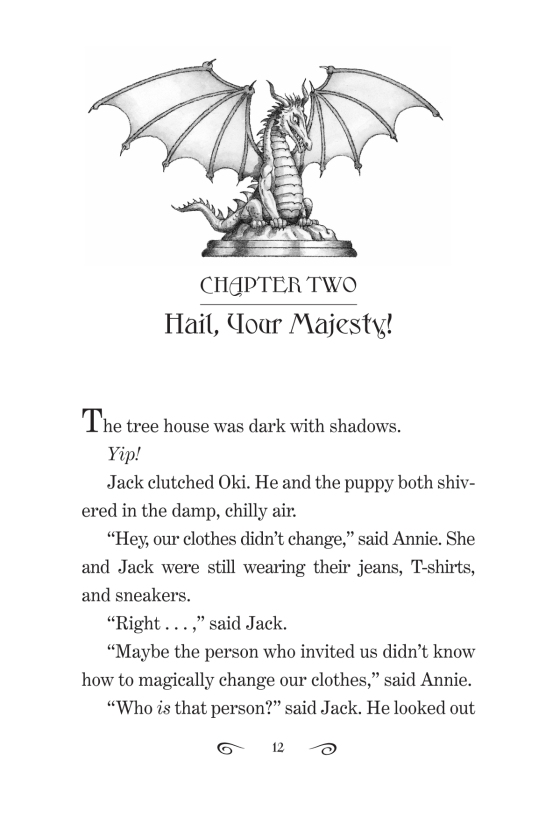 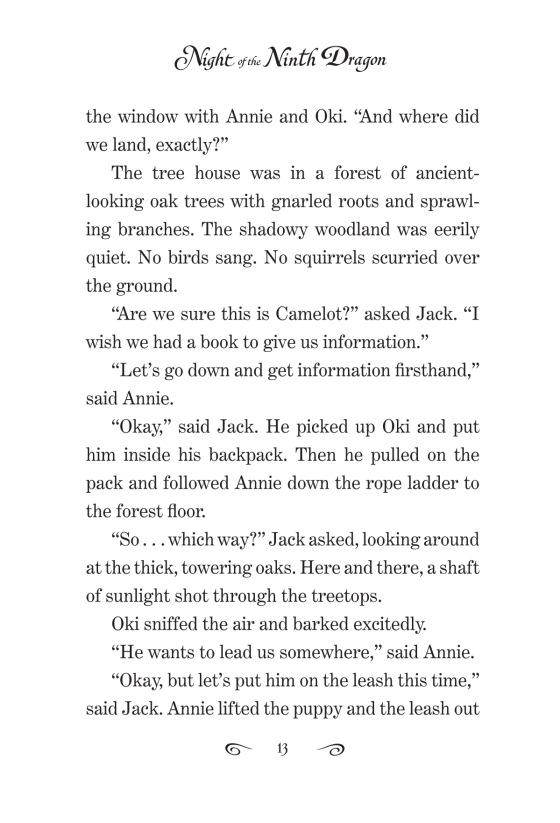 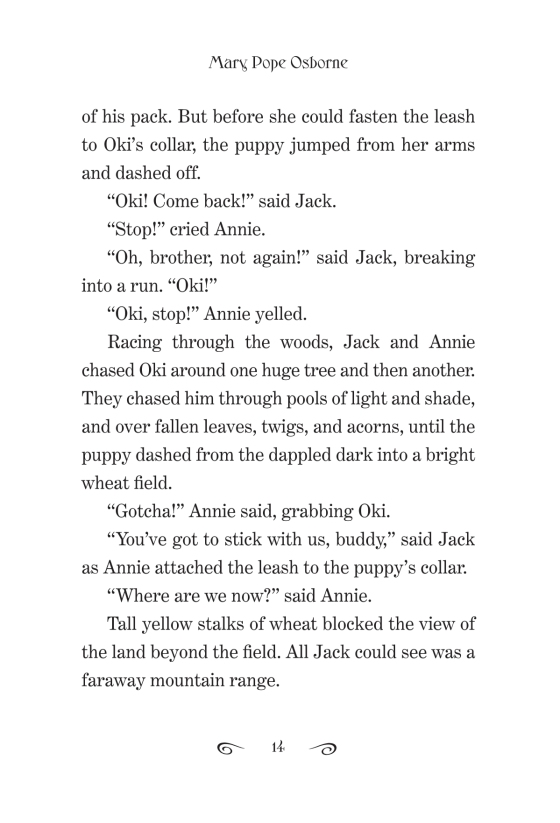 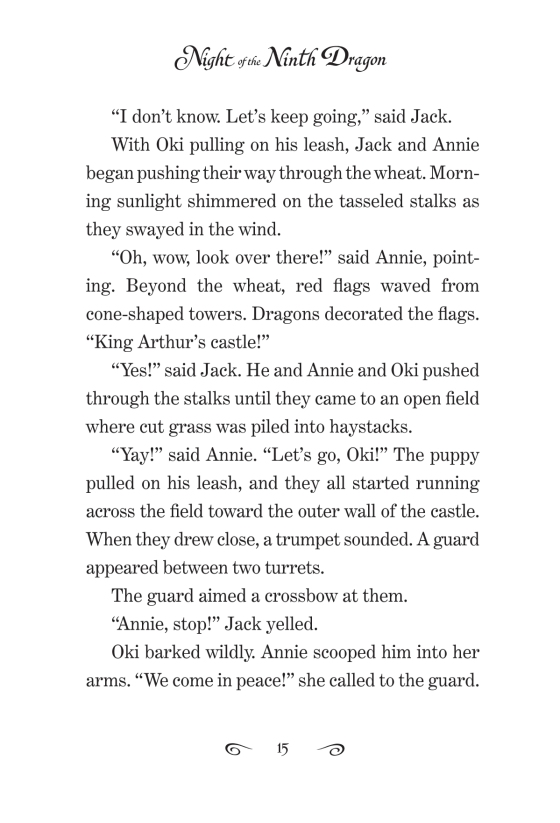 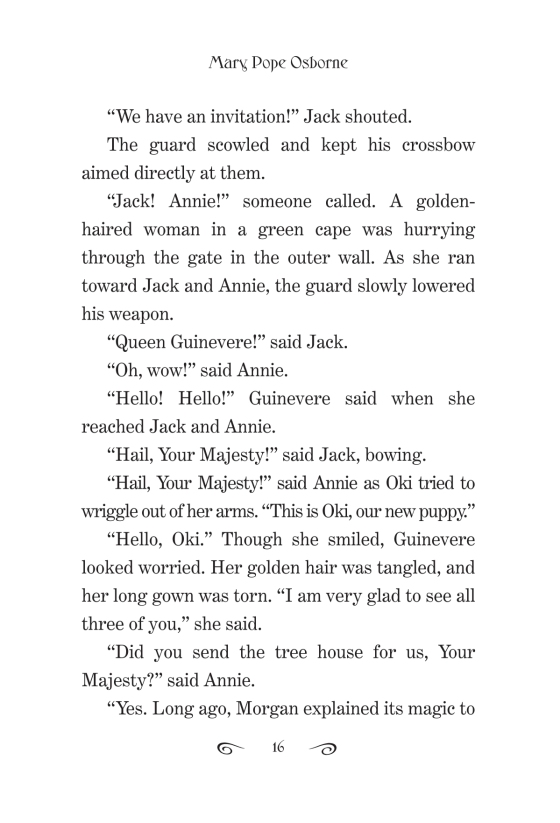 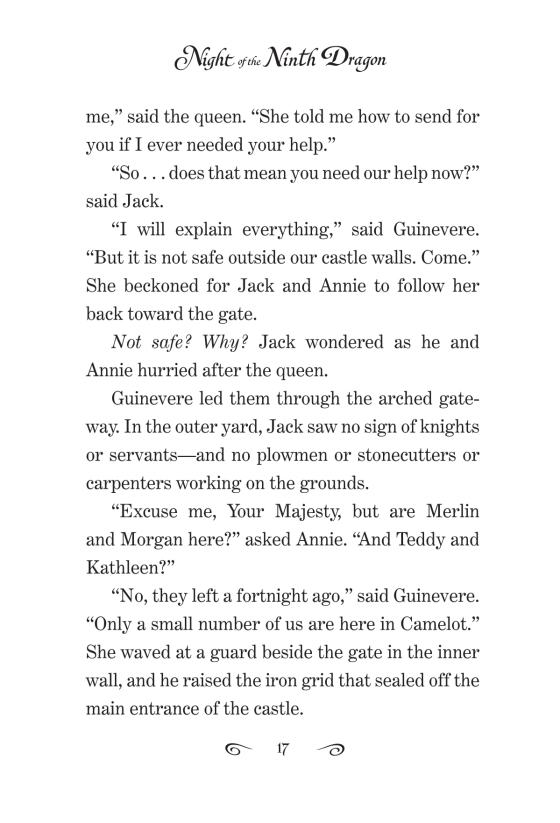 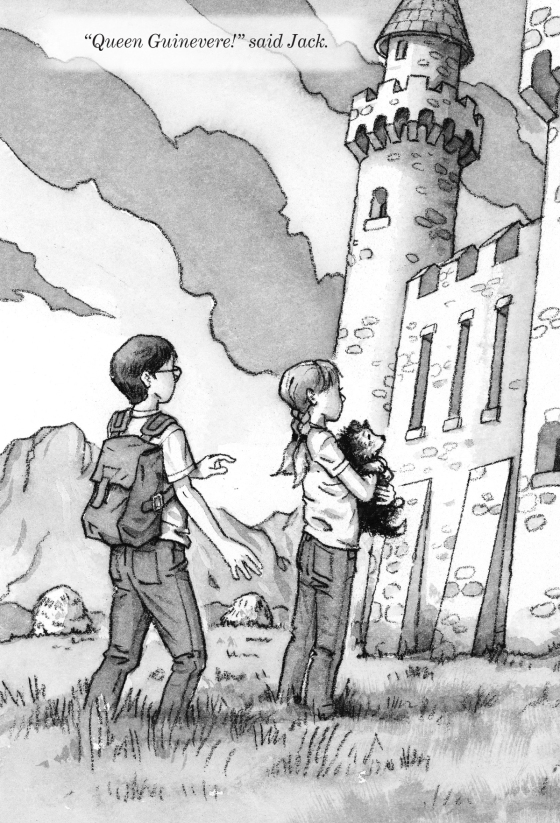 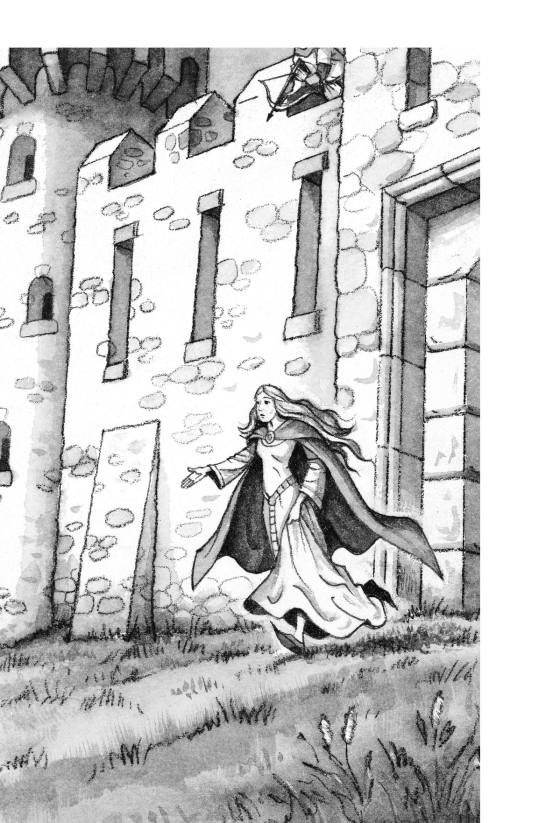