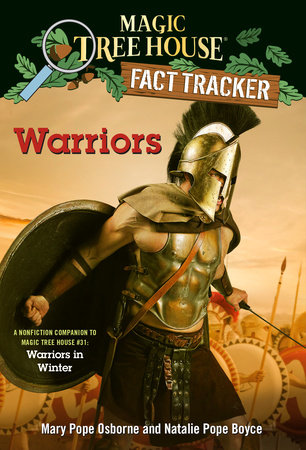 A nonfiction companion to Magic Tree House #31: Warriors in Winter

When Jack and Annie came back from their adventure in Magic Tree House #31: Warriors in Winter, they had lots of questions. What kinds of weapons did the ancient Greeks use? How did Roman soldiers fight? Why did knights have tournaments? Who was famous for his war elephants? Find out the answers to these questions and more as Jack and Annie track the facts about ancient warriors.

Filled with up-to-date information, photographs, illustrations, and fun tidbits from Jack and Annie, the Fact Trackers are the perfect way for kids to find out more about the topics they discover in their favorite Magic Tree House adventures.

Track the facts about warriors, weapons, and battles throughout history in this nonfiction companion to the #1 bestselling Magic Tree House series!

When Jack and Annie came back from their adventure in Magic Tree House #31: Warriors in Winter, they had lots of questions. What kinds of weapons did the ancient Greeks use? How did Roman soldiers fight? Why did knights have tournaments? Who was famous for his war elephants? Find out the answers to these questions and more as Jack and Annie track the facts about ancient warriors.

Filled with up-to-date information, photographs, illustrations, and fun tidbits from Jack and Annie, the Fact Trackers are the perfect way for kids to find out more about the topics they discover in their favorite Magic Tree House adventures.

Did you know that there's a Magic Tree House book for every kid?
Magic Tree House: Adventures with Jack and Annie, perfect for readers who are just beginning chapter books
Merlin Missions: More challenging adventures for the experienced reader
Fact Trackers: Nonfiction companions to your favorite Magic Tree House adventures

Wars and warriors have been around for thousands of years. Our earliest ancestors didn’t have large armies. They fought in small groups or tribes over hunting rights or for natural resources like water.
Much of what we know about ancient warfare comes from archaeologists (arkee-AH-luh-jists). They are scientists who learn how people lived long ago by studying the objects they used.
In 1964, a team of archaeologists was working near the River Nile in Sudan. They discovered a graveyard that was over 13,000 years old. Fifty-nine skeletons lay close together. Twenty-seven had battle injuries. One body was found with thirty-nine pieces of flint from arrows and other flint-tipped weapons!
We don’t know why these people were fighting. But their skeletons give us clues about the weapons they used so long ago.
Mesopotamia
Mesopotamia is now Iraq and parts of nearby countries. About 10,000 years ago, people settled in southern Mesopotamia in a region called Sumer. Sumer was made up of several different city-states. City-states are like small countries that include a city and the land around it.
Even though Sumerians all spoke the same language, each city-state had its own government ruled by a king or priest.
The Sumerians were great inventors. They created the first written language and one of the first modern calendars. They used math to solve problems and were the first people to put wheels on carts and wagons.
Sumerians also went to war. Much of what we know about the earliest warfare comes from written records that the Sumerians left behind.
Warlike People
For more than a thousand years, Sumerian city-states waged war against one another. Because they needed strong armies, the Sumerians invented new ways of fighting.
Sumerian soldiers were the first to wear bronze helmets and to fight with battle-axes. They invented the deadly socket ax, with a blade so narrow it could pierce bronze armor.
The Sumerians began using four-wheeled chariots pulled by donkeys to carry soldiers and supplies. During a battle, archers stood in them and shot at the enemy. As time passed, soldiers fought in two-wheeled chariots pulled by two or four horses.
Phalanx
Sumerians fought in a phalanx (FAYlanks) formation. A phalanx is a group of soldiers who fight close together with shields and spears. In a Sumerian phalanx, men stood side by side in lines, one behind the other.
Soldiers in the front overlapped their large shields to protect themselves from arrows and spears.
Before a battle, enemy armies stood across from one another, their soldiers tense and waiting. Archers, slingers, and spear throwers got into position.
Suddenly, hundreds of arrows, rocks, and spears whistled through the air. Then the phalanxes pushed forward to meet the enemy.
King Sargon
King Sargon was a famous warrior-king. He led an army of several thousand soldiers, including many bowmen. Sargon and his fighters swept down from the north to attack the Sumerian city-states. By about 2334 BCE, he ruled all of Sumer.
Sargon went on to capture lands far beyond Mesopotamia. His large kingdom became the first empire in history.
Sargon’s empire lasted about 100 years. Then, for 300 years, there was a terrible drought. Fields dried up, and people moved away. By 2193 BCE, Sargon’s empire was so weak that it crumbled.
Ancient Egypt
Egypt is a hot, dry country in northeast Africa. Five thousand years ago, it was one of the most powerful civilizations in the world. Egyptian kings were called pharaohs (FARE-ohz). Their people thought of them as living gods. Most pharaohs were men, but women could be pharaohs, too.
Egypt and War
Because Egypt was surrounded by water and deserts, it was a difficult country to attack. But around 1700 BCE, the Hyksos, a mixed group from West Asia, invaded Egypt. They controlled it for a hundred years.
A great pharaoh named Ahmose I commanded an Egyptian army that drove the Hyksos out. Under Ahmose’s rule, Egypt grew into a rich, powerful country.
The Army and Its Weapons
Egyptians had learned new ways of fighting from the Hyksos. They began to use bronze weapons, horse-drawn chariots, and composite (com-PAH-zit) bows.
Composite Bows
The word composite means “made of different things.” Composite bows were made of wood, water buffalo horns, fish bladders, and animal sinew. Don’t laugh! These bows could shoot arrows that went 900 feet at speeds of 45 miles per hour!
Chariots
When soldiers drove chariots into battle, one held the reins and a whip. Another shot arrows as they raced along.
Chariots worked best on flat, smooth ground. If one overturned, soldiers leapt off, grabbed the horses’ reins, and tried to jump on their backs. In 1274 BCE, the Egyptians, led by Pharaoh Ramses II, fought the Hittites. There were about 5,000 chariots in the battle!
Foot Soldiers
Most Egyptian soldiers fought on foot. Some were archers. Others were armed with spears or axes.
The toughest foot soldiers were called “strong-arm boys.” They were experts at close combat with axes and spears.
Because Egypt is so hot, foot soldiers dressed in short tunics and sandals. Instead of wearing armor, they carried shields made of bull hide.
The Battle Begins
Thousands of soldiers were often on the battlefield. Foot soldiers in phalanx formations stood in the middle, with chariots on both sides and archers standing by on the front lines.
Trumpets sounded. Chariot drivers charged straight at enemy archers and turned around only at the very last minute. Then the phalanxes moved toward the enemy.
Copyright © 2019 by Mary Pope Osborne and Natalie Pope Boyce; illustrated by Isidre MonÃ©s. All rights reserved. No part of this excerpt may be reproduced or reprinted without permission in writing from the publisher.

Other Books by this Author 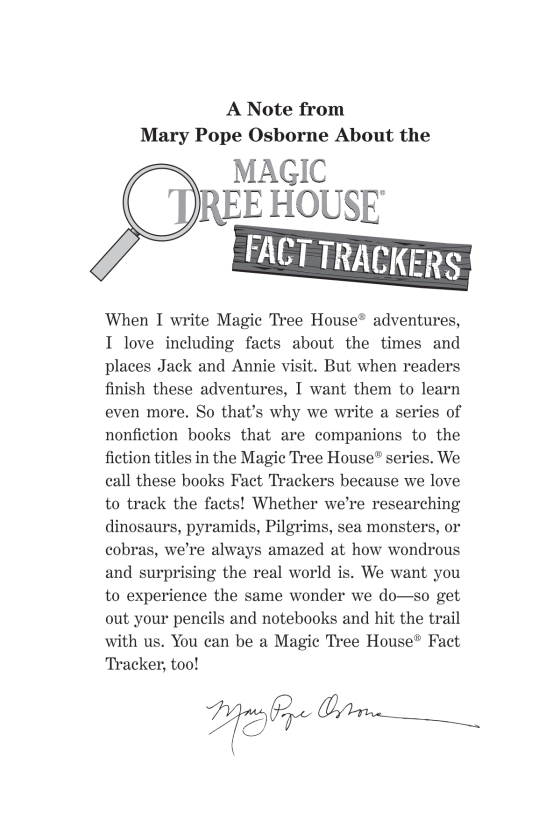 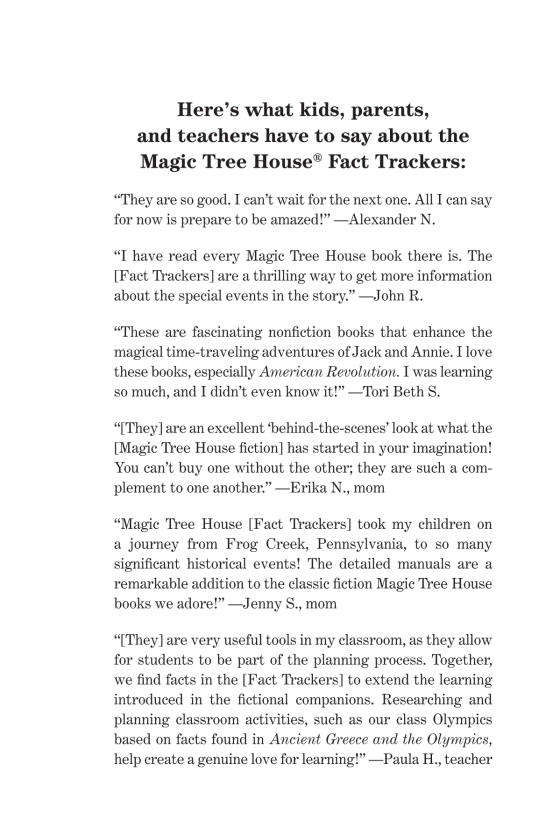 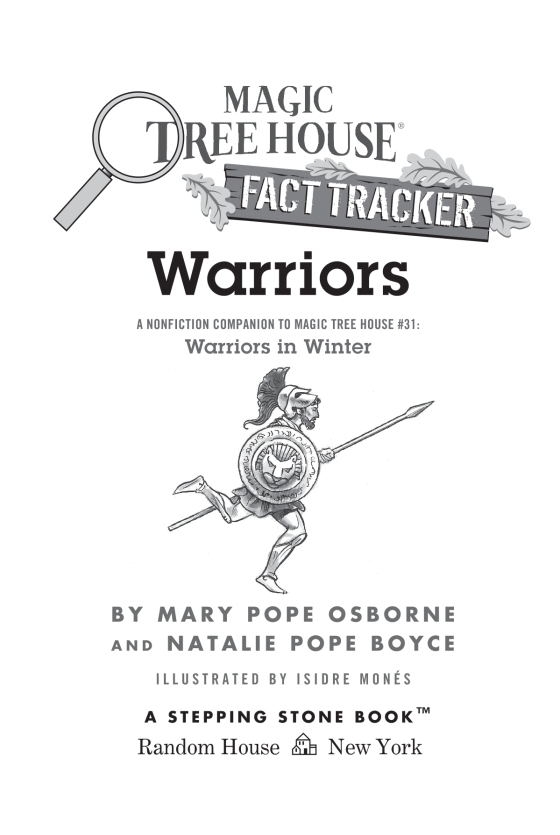 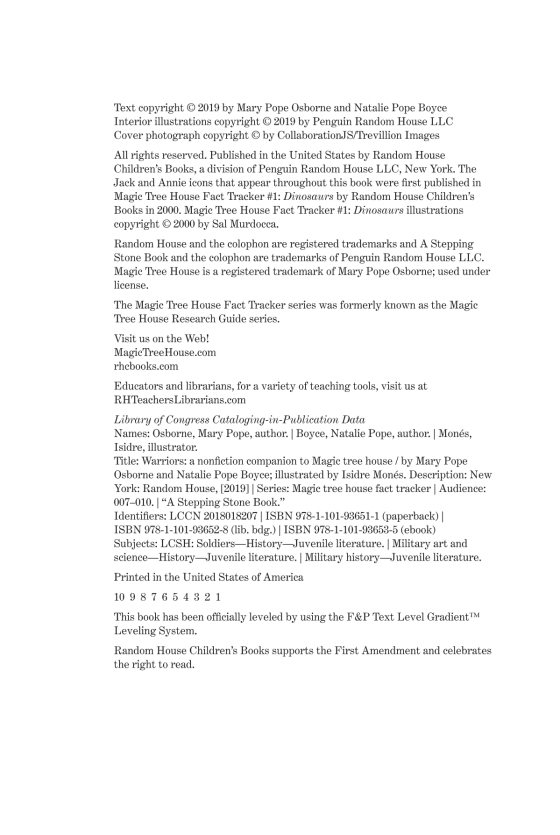 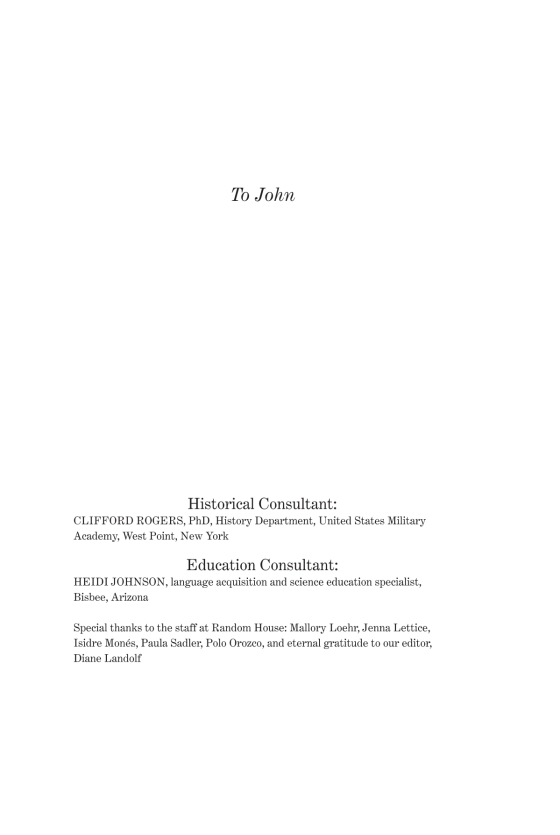 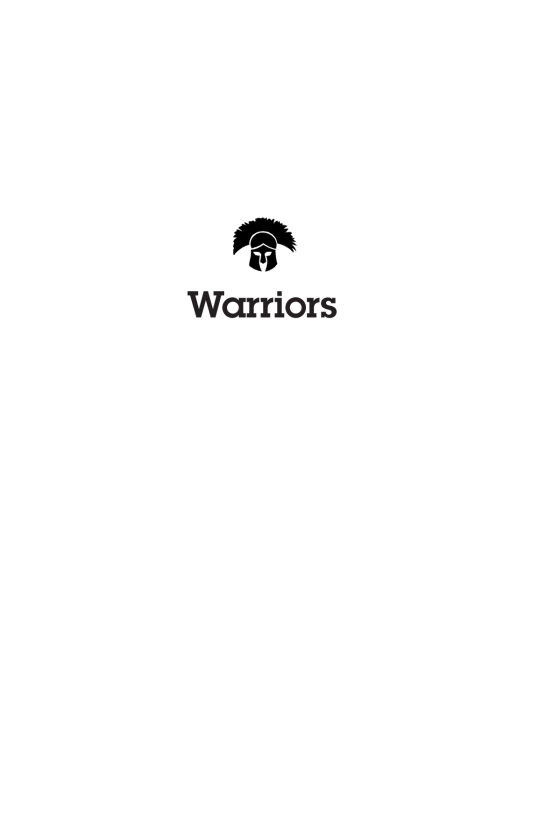 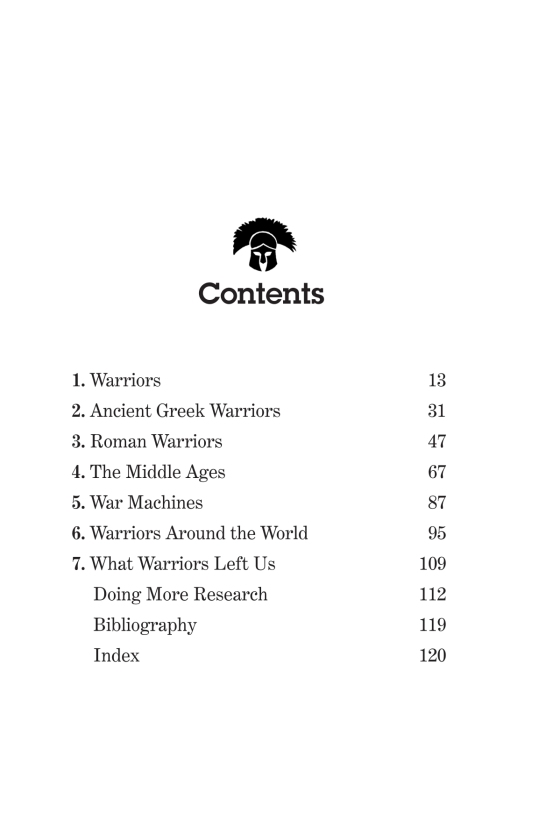 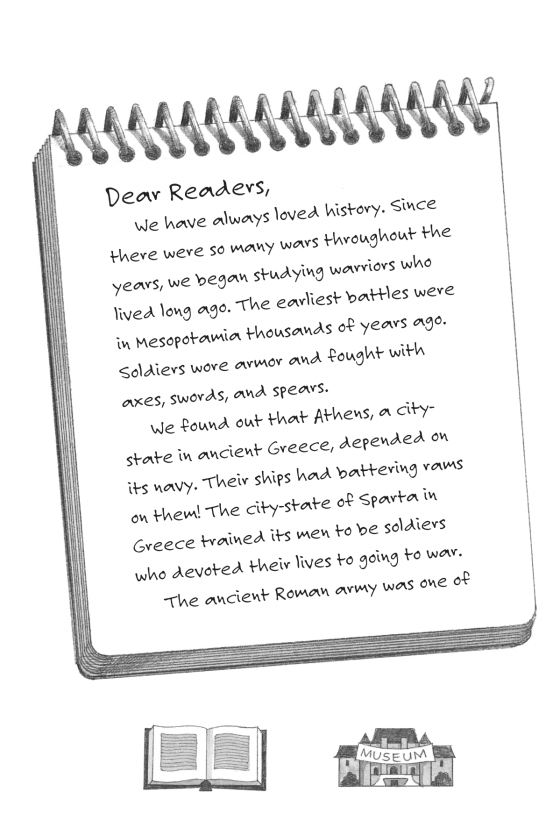 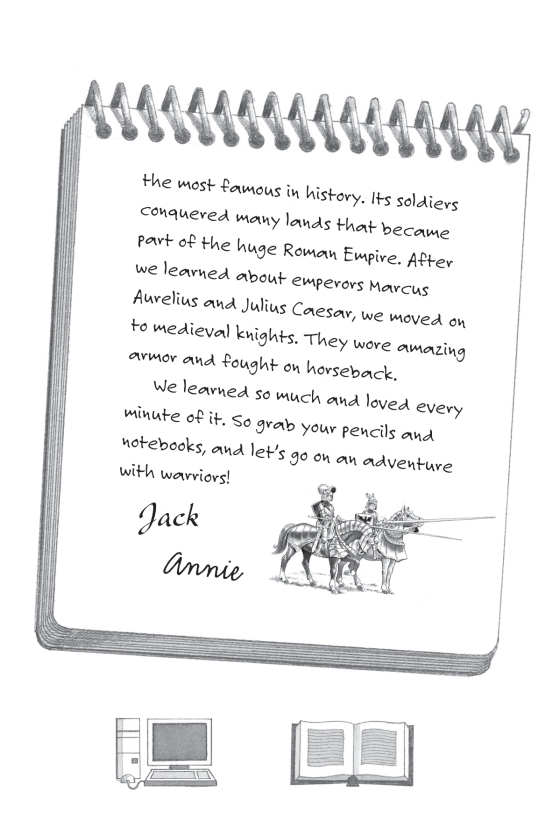 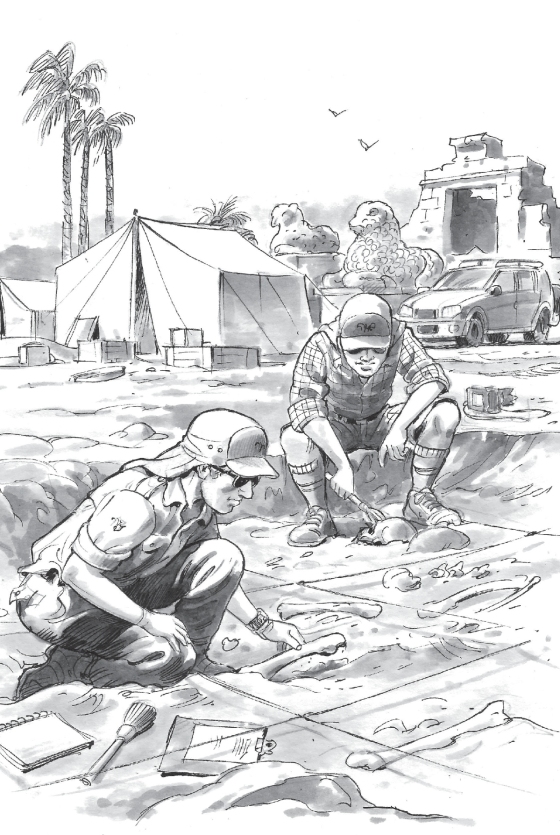 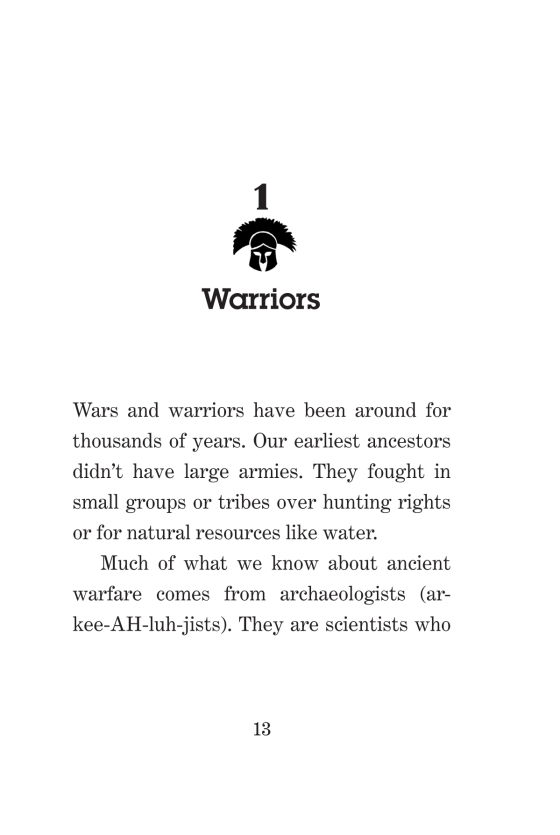 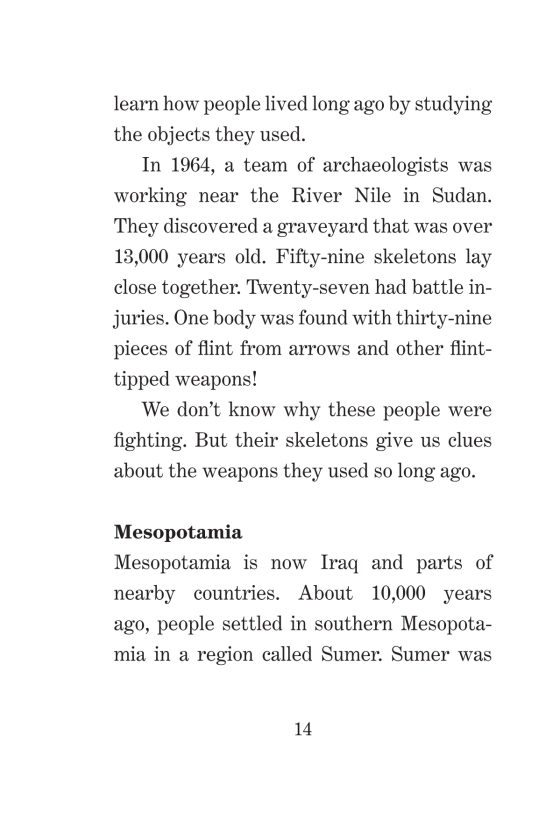 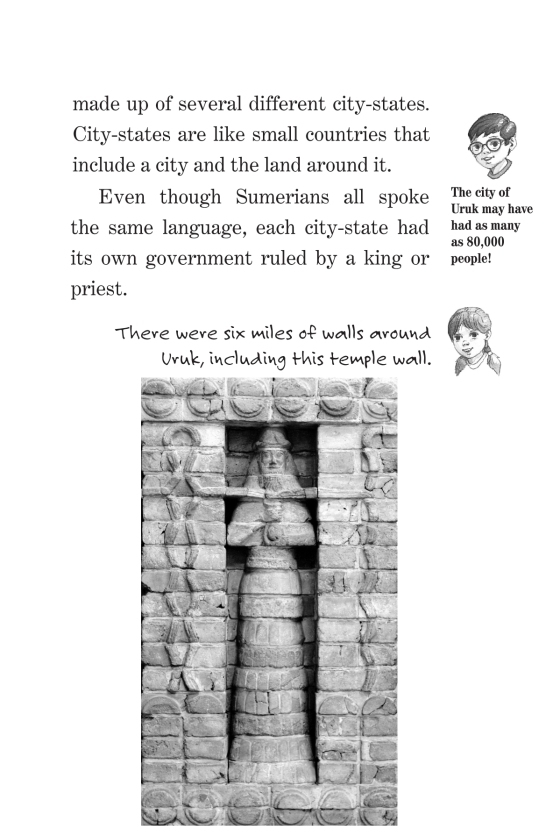 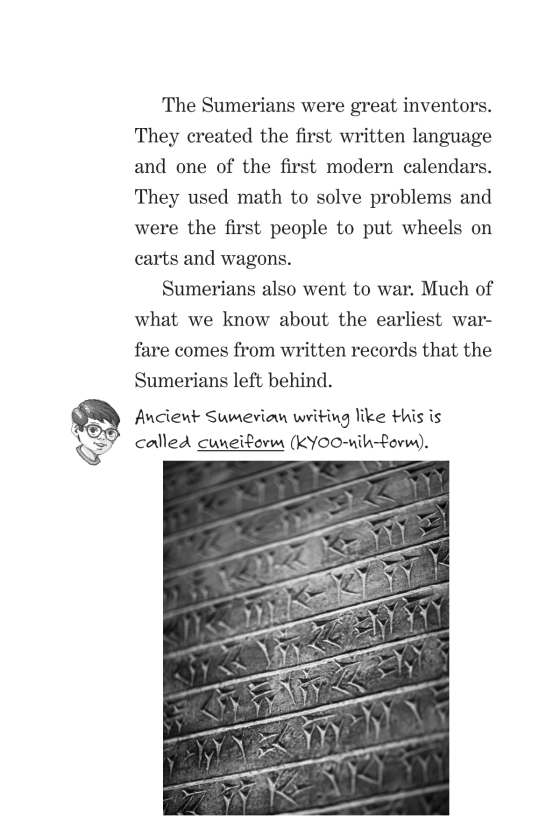 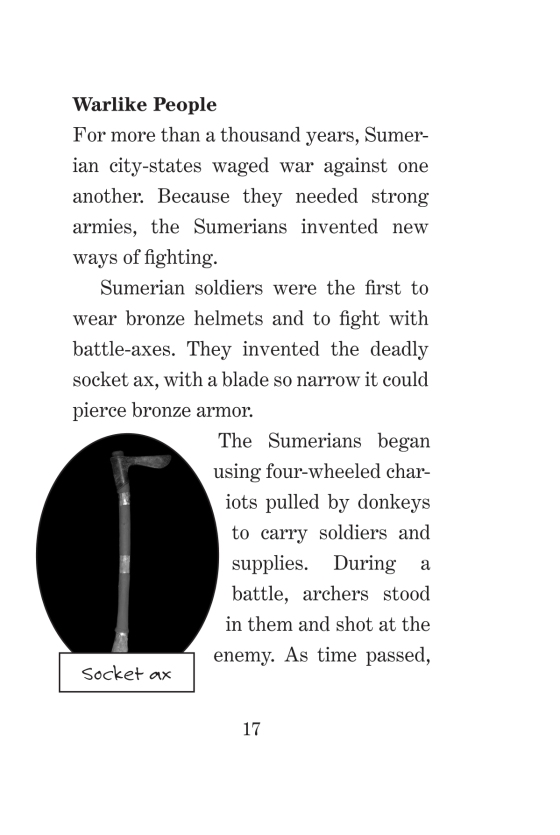 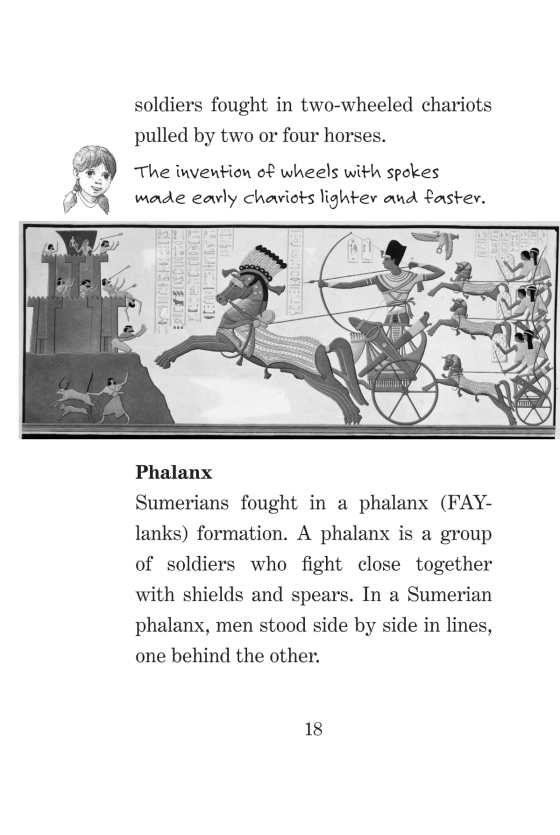 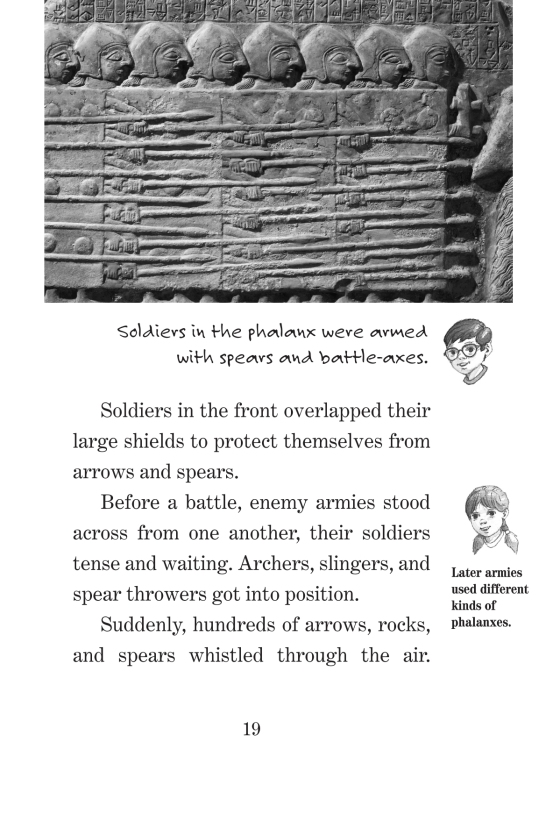 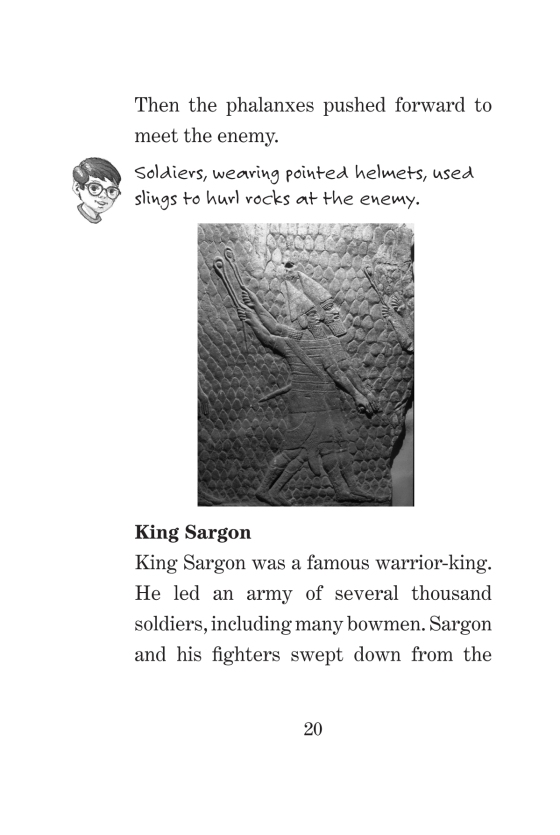 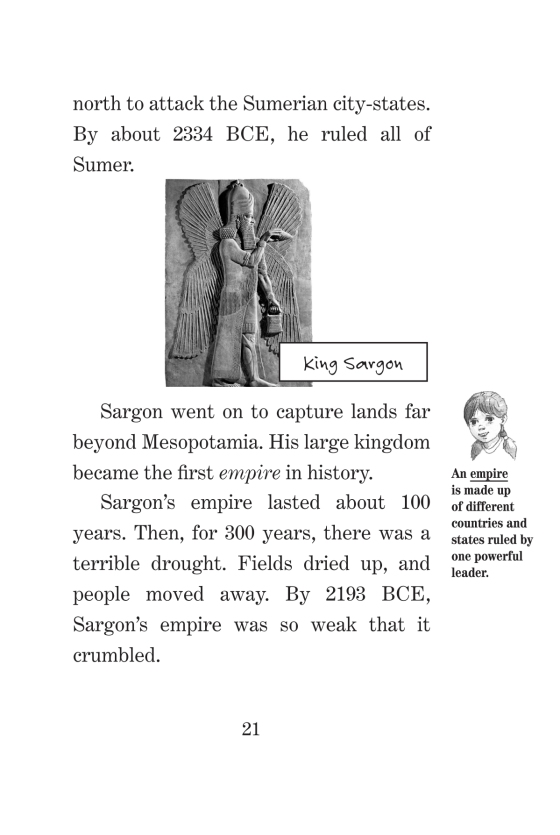 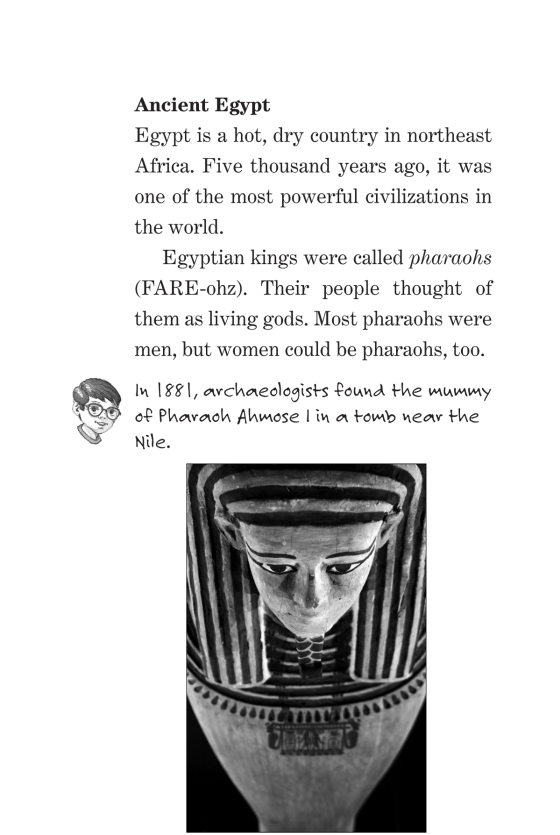 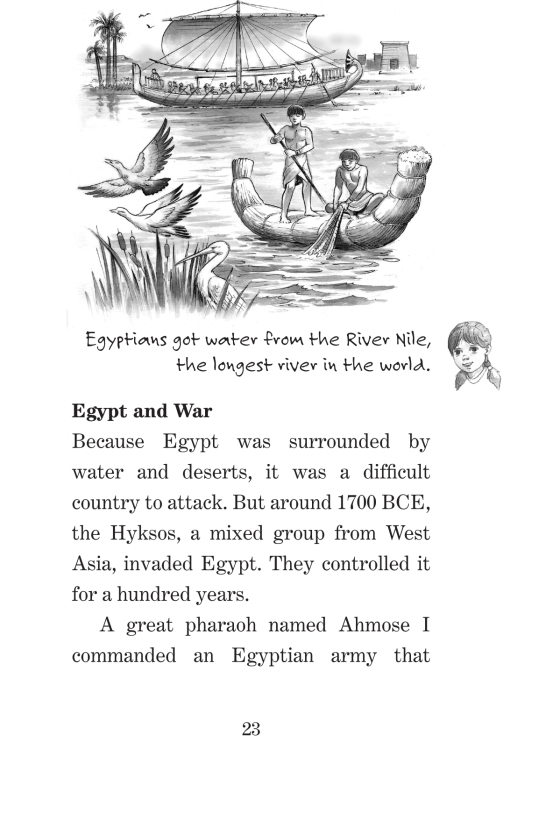 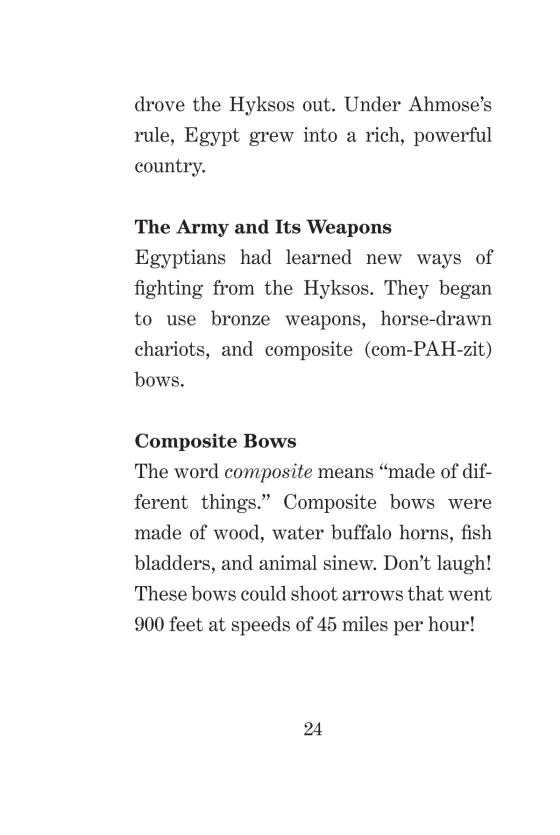