Penguin Random House joins with Former President Barack Obama and First Lady Michelle Obama to announce that the company will donate an additional 300,000 children’s books to First Book as part of the Hope Love Give campaign, building upon its previously announced donation of one million of its children’s books in the Obama family’s name. Plans for the 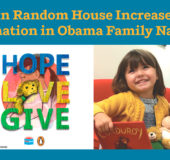